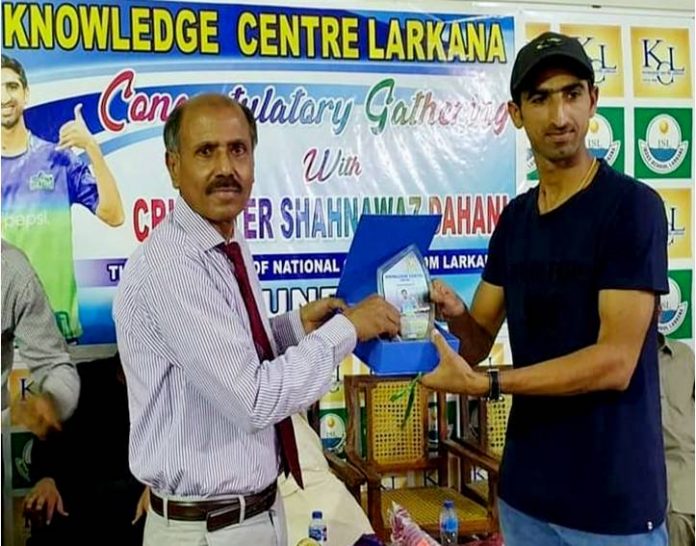 LARKANA: Knowledge Centre Larkana hosted a reception in honor of fast emerging cricketer & fast bowler Shahnawaz Dahani, who took highest wickets in recently concluded SPL sixth season. Professor Mukhtiar Samo Founder of Knowledge Centre presented him achievement award and a traditional gift of Sindhi Ajrak. Large number of students and cricket-lover citizens from cross section of the population attended the reception and gave a loud applause to rising cricketer from their city Larkana on his glorious success in cricket. Shahnawaz Dahani speaking on the occasion said that I was satisfied that I had returned to my city after achieving the title of fast bowler. H said that I would put my all energies and talent to show my best performance and win against West Indies in forthcoming series. He further said that I belonged to very small village in Larkana and had worked as a farmer on our agricultural lands. Initially I was playing with tape ball with children in village but later used hard ball. I had a passion to be a successful cricketer and had worked hard to receive the present position. He thanked the management, faculty and students of Knowledge Centre for honoring him and showing their love with him and advised students to be sincere with their education and work hard to achieve their goal. Prof. Mukhtiar Samo founder of Knowledge Centre said that Youth had got an immense talent, if given chance they could prove their worth and add into name and fame of their mother land. Shahnawaz Dahani was an epitome of hardworking and determination who had shined the name of his country through his best performance in cricket. He said that educational institutions should ensure that the students were given inspiration and training to be practical besides good education. Former DIG Narcotics Riaz Hussain Soomro, Niaz Hussain Abro chairman Larkana Shahri Ithad also shed light on achievements of Shahnawaz Dahani.