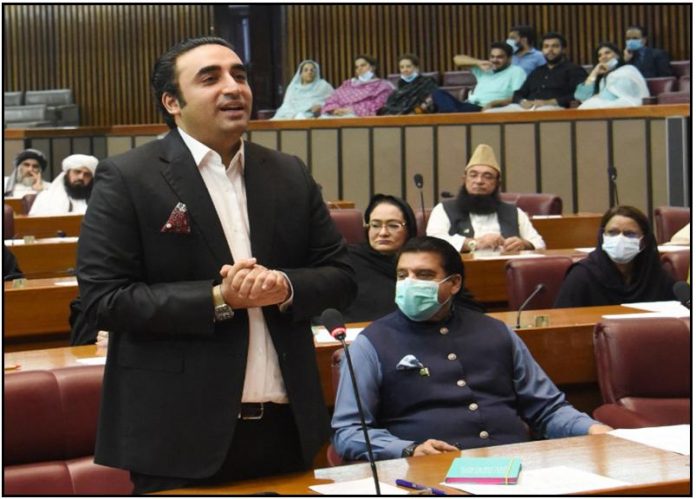 ISLAMABAD: During his speech in the Parliament today, the PPP chairperson lashed out at the government’s legislative process, accusing it of “rigging”. “We think that this budget session has become a source of embarrassment for every Pakistani,” he said. “Mr Speaker, I complain to you that you have snatched our rights from us,” added Bhutto. Bhutto told NA Speaker Asad Qaiser that the Opposition lawmakers expected him to keep the “sanctity of the chair” and act neutrally. He said if “rigging” had not been carried out yesterday when the finance bill was being approved, the government would not have been able to obtain 172 votes. Bhutto said the Opposition members had more rights than merely reading out their amendments to the bill. “We have the right to be heard also,” he said. “If our right to vote is not protected then what will become of the protection of the right of ordinary Pakistanis?” he asked. Bhutto said the Opposition asked for a recount of the votes but the speaker did not oblige him. He said even Deputy Speaker Qasim Suri kept taking time and did not oblige the Opposition. However, Bilawal admitted that the Opposition members were also to blame for their poor attendance during the session. The PPP chairperson accused the speaker of not protecting the rights of the Opposition members, adding that “the whole nation saw that if you did not rig [the parliamentary process] then you wouldn’t have received 172 votes”. Taking a dig at Finance Minister Shaukat Tarin, Bhutto said that an “unelected member” kept rejecting the Opposition’s amendments. “According to Rule 276, if there is a voice vote challenge, you have to count it,” said Bhutto. Bhutto told the speaker that he challenged the vote during the last phase of the legislation but “you did not listen to me”. “What else is it, if not rigging?” the PPP leader asked before concluding his speech, leaving and then returning when the foreign minister challenged him to come back.