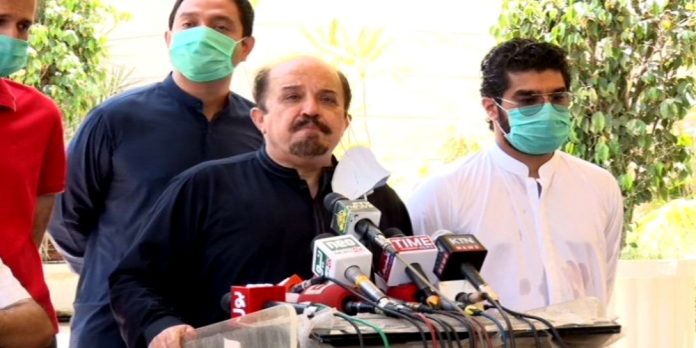 KARACHI: Pakistan Tehreek-e-Insaaf (PTI) MPA Firdous Shamim Naqvi on Tuesday announced resignation from his provincial assembly seat of PS-101 Karachi East-III. Firdous Shamim Naqvi made the announcement during the provincial assembly session and also left the assembly in protest. Pakistan Tehreek-e-Insaf (PTI) held a protest in today’s session of the Sindh Assembly (SA) against the ban on entry of eight lawmakers. Speaker Agha Siraj Durrani on Monday banned the entry of eight lawmakers into provincial assembly over the issue of bringing “folding charpoy” in the House. The entry of eight lawmakers namely, Pakistan-Tehreek-e-Insaf (PTI) parliamentary leader Bilal Ahmed, Saeed Ahmed, Arsalan Taj, Muhammad Ali Aziz, Adeel Ahmed, Nawaz Jadoon, Raja Azhar has been banned. Earlier on Monday, opposition lawmakers earlier had brought a charpoy in the Assembly while terming it a coffin of democracy as the proceedings once again witnessed a rumpus. According to the visuals captured during the provincial assembly proceedings, Opposition Leader Haleem Adil Shaikh was seen leading the PTI lawmakers from the entrance of the assembly as they carry a charpoy with a banner over it inscribed with letters ‘Jamhoriyat Ka Janaza’ [coffin of democracy].