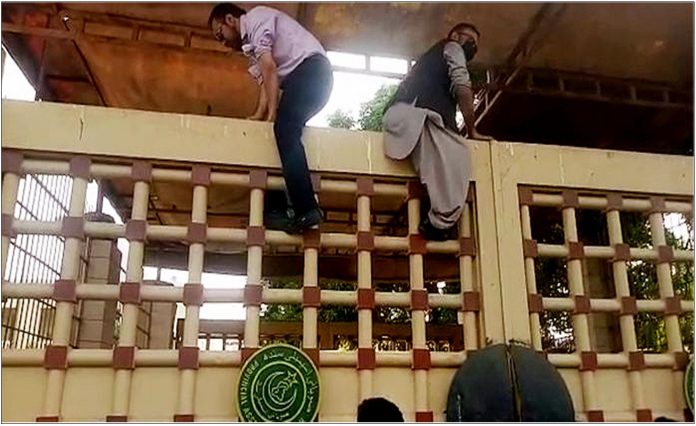 KARACHI: On Tuesday, Pakistan Tehreek e Insaf lawmakers reached outside the Sindh Assembly even after being banned by the Speaker Agha Siraj Durrani from entering the premises. The security officials and assembly staff confronted the PTI MPA’s and tried to stop them from entering the building in which they exchanged dialogues involving verbal and physical abuse by the PTI lawmakers. They also tried to break the lock of the entrance gate and even tried to kick it as well. During the session, Speaker of Sindh Assembly, Agha Siraj Durrani, ordered to impose additional force outside the assembly gate in order to prevent such troublemakers from creating a fuss outside the building. He also said that ‘we will not tolerate such behavior inside or outside the house as the decorum of the house is to be respected by every member and I will make sure that strict measures are to be taken against the troublemakers’. After the investigation, PTI lawmakers including Bilal Ahmed, Saeed Ahmed, Arsalan Taj, Muhammad Ali Aziz, Adeel Ahmed, Nawaz Jadoon and Raja Azhar have been banned from entering the house till the current session is in progress.