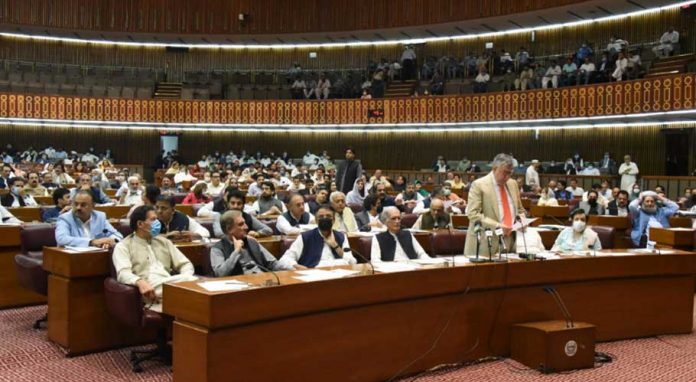 ISLAMABAD: The government’s proposed Finance Bill 2021 was passed on Tuesday by the National Assembly by a majority vote. The NA session will resume tomorrow at 11:30am and Prime Minister Imran Khan is due to deliver an address. According to the state-run APP, 240 lawmakers participated in the debate on the federal budget. The motion was passed with majority vote which led to the passage of Finance Bill, 2021 after clause by clause reading as well as voice voting along with amendments. The session was first chaired by Deputy Speaker Qasim Suri, after which Speaker Asad Qaiser presided over the session and Qasim Suri joined the members so he may become part of the total strength. Finance Minister Shaukat Tarin introduced the Finance Amendment Bill 2021 in the House which was opposed by the Opposition. The House took verbal approval of the motion to introduce the Finance Bill which was challenged by Nawab Muhammad Yousuf Talpur of the PPP after which the Speaker directed for the count of votes to begin. After the completion of the counting process in the House, the National Assembly passed the motion to introduce the Finance Bill by a majority vote. There were 172 votes in favour of the Finance Bill while 138 votes were against it. Following the approval of the motion in the House, the process of getting a clause-wise approval of the Finance Bill 2021 began. Among the House’s business for today was also the amendment of certain clauses within the bill. One of the amendments in the bill pertains to an added clause, under which MNAs will now be provided vouchers instead of air tickets. This amendment was met with no objection by the Opposition.