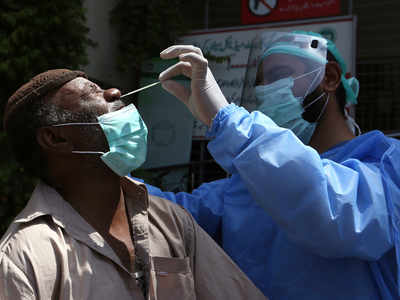 KARACHI: The National Bioethics Committee of Pakistan (NBC) has refused to allow at least five double-blind, placebo-controlled Phase-III clinical trials of mRNA and conventional COVID-19 vaccines on “ethical grounds”, arguing that Pakistani citizens cannot be treated as “guinea pigs” anymore. “Some local and multinational pharmaceutical companies have [sent applications] to conduct placebo-controlled trials of mRNA and conventional COVID-19 vaccines in Pakistan,” an official of the National Bioethics Committee (NBC) of Pakistan told The News. However, NBC has told the companies that the use of a placebo cannot be allowed during these trials at a time when different types of conventional vaccines are available in the country, the official said. The official said Pakistan is going to acquire an mRNA vaccine “very soon”.The NBC official said principal investigators at the Aga Khan University Hospital (AKUH) and University of Health Sciences (UHS), Lahore had sought to conduct global and multi-national, randomised, double-blind, placebo-controlled, Phase III clinical studies to evaluate the protective efficacy, safety, and immunogenicity of SARS-CoV-2 mRNA and different conventional vaccines at their centres. “These under-trial vaccines include a Chinese Messenger Ribonucleic Acid (mRNA) vaccine as well as various conventional vaccines including inactivated Vero cells, recombinant COVID-19 vaccine (Sf9 cells), and Fusion Protein Vaccine (V-01) in adults aged 18 and above,” the official said. The NBC’s expert committee suggested that instead of using a placebo, vaccines available in Pakistan should be used, which is not acceptable to investigators and manufacturers, the official added. According to experts, a placebo is a medicine or procedure prescribed for the psychological benefit to the patient rather than for any physiological effect. It is a substance or treatment which is designed to have no therapeutic value, including inert injections, pills, or any other kind of fake treatment. The NBC official said injecting hundreds of people at a time with placebos when there are around six vaccines available in Pakistan and are being used to inoculate people, would be “ethically wrong” and cannot be allowed. “A person, who is given a placebo instead of a vaccine can contract the coronavirus infection and even die. This would be happening at a time when they would be assured that they have received the vaccine jabs. This is not acceptable on ethical grounds”, the official added. On the recommendations from the expert committee of NBC, the official said, principal investigators were asked to review the course of their studies, and if they agree to use any of the vaccines available in the country instead of a placebo, they could be allowed to conduct the studies. However, so far, they appeared unwilling to change the design of their studies on technical grounds. The NBC official provided the names of local and multinational pharmaceutical companies which were willing to conduct phase-III clinical trials of Chinese and European firms but requested not to mention their details. “Earlier, the NBC allowed placebo-controlled trials in the country including the trials of CanSino vaccine while phase-III clinical trials of a triple-dose Chinese vaccine titled ZF-2001 are also underway at UHS Lahore, but they were allowed when COVID-19 vaccines were not present in the country,” the official said. But now, there was no need to conduct placebo-controlled trials as the efficacy, safety, and immunogenicity of the vaccines could be ascertained against other vaccines too, the official said. Vice-Chancellor University of Health Sciences Lahore Prof Javed Akram confirmed that NBC had not approved the placebo-controlled trials and added the varsity will now change the design and protocols of the studies. “We are going to resubmit the proposals of our phase-III clinical trials of different vaccines after NBC refused to allow us placebo-controlled studies. Their argument that subjects receiving placebo or water during the course of trials, which may take 6 to 12 months, would remain without a vaccine, is valid and we accept that,” Prof Akram said.