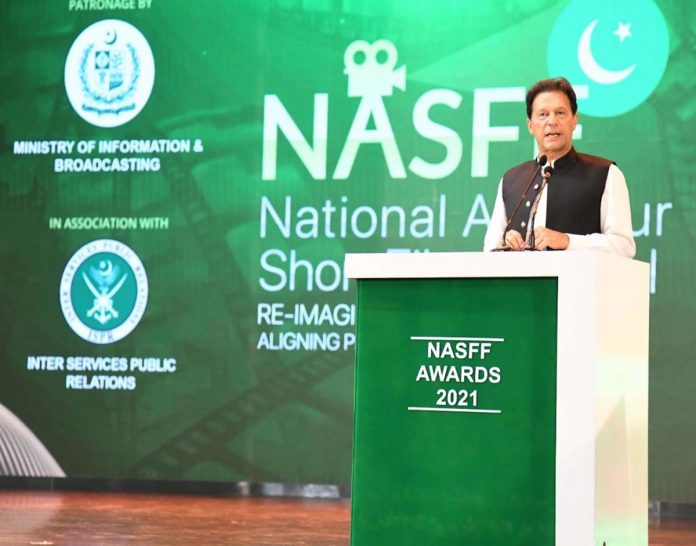 ISLAMABAD:Prime Minister Imran Khan on Saturday said if people wish to promote a soft image of Pakistan across the globe, then they should advocate “Pakistaniat.” The premier, speaking during the National Amateur Short Film Festival (NASFF) Awards Ceremony in Islamabad, said: “During the war on terror Pakistanis were termed as extremists. To counter this, they were asked to promote a soft image of Pakistan.” The premier said the countrymen thought that if they wore Western clothes and spoke English, it would project a soft image of Pakistan. “During this time I was termed as Taliban Khan.” Speaking English and wearing Western clothes does not project a soft image, it only speaks of an inferiority complex, he said, adding: “A soft image is projected through self-reliance so first respect yourself and the world will respect you in turn.” The prime minister said the world valued original content and not imitation, as he criticised the films produced in Pakistan, which “copied” Bollywood. “I have seen the inception of Pakistan’s film industry we started copying Indian films” after some years, he said regretfully. The prime minister said Pakistan began adopting foreign cultures instead of promoting its own through the films. “Bring original ideas and don’t be afraid of failure,” he told budding filmmakers. “The person who is afraid of failure will never become a good player,” he added. Young filmmakers who have tried to promote Pakistan’s culture, will receive special allowances from the government so their morale is boosted, the premier said. PM Khan said when he would take Nusrat Fateh Ali Khan with him when he would go abroad, the singers in the US would love his music, and not that of the Pakistani pop singers — as they only imitated the West. “The world values original ideas,” he reiterated, adding that Pakistan’s television industry in the past used to produce quality content that was liked in India as well. Shedding light on the blessings that Pakistan has been bestowed with, he said that the country has 12 climatic zones, giving it the ease to grow anything that it wants. “The past government did not pay attention to tourism for historical sites Tourism in Pakistan has a lot of potential and we are taking focused steps to promote tourism in the country,” he said. The premier said the soft image of a country can only be promoted through ownership of one’s identity. “If we want to project a soft image of Pakistan, then we need to promote [the country’s true identity].”