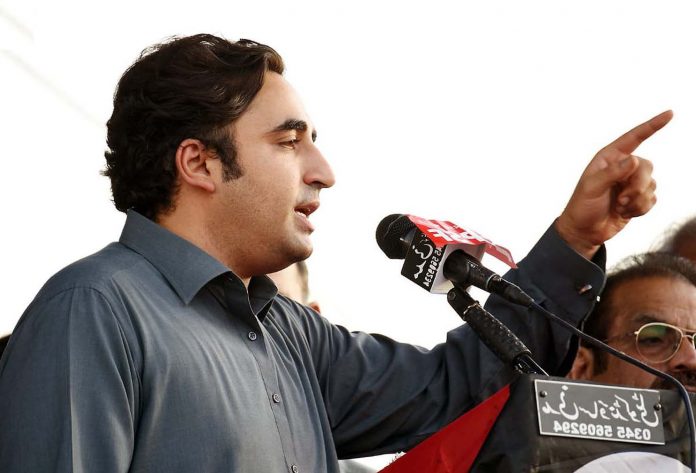 KOTLI:PPP Chairman Bilawal Bhutto Zardari on Saturday termed Prime Minister Imran Khan a “security risk” for the country following his stance on the need for a nuclear programme. PM Imran Khan, while speaking to Jonathan Swan on HBO’s “Axios” had said that Pakistan’s nuclear arsenal is “simply a deterrent, to protect ourselves”, adding that ever since its nuclear capability, it had had no wars with India.
“The moment there is a settlement on Kashmir, the two neighbours would live as civilised people. We will not need to have nuclear deterrents,” the premier said. Hitting out at the prime minister for the remarks at a rally in Azad Jammu and Kashmir’s Kotli Division today, Bilawal said that his grandfather, Zulfiqar Bhutto, “who gave Pakistan its nuclear capability” was declared a security risk, as was his mother, former prime minister Benazir Bhutto. “But when your puppet prime minister says we do not have any need for the atomic weapons programme, does he not become a security risk?” Bilawal said the prime minister he had “not only compromised on Kashmir but also wanted to compromise Pakistan’s nuclear capability”.”You have to give a message to the entities who declared the person who gave you nuclear capability and missile technology, a security risk. “The Kashmiri people will declare this puppet prime minister a security risk by rejecting him in the elections. You will chase PTI out of Kashmir.” Bilawal said that PPP would get its prime minister elected in Pakistan after getting their candidate elected in the upcoming Azad Jammu and Kashmir Legislative Assembly elections. “There is only one party which can not only protect Azad Kashmir but occupied Kashmir as well. You have to elect PPP’s candidate by a huge margin,” he said. When Modi had attacked occupied Kashmir, the “coward” Imran had said, “What can I do?”, Bilawal lamented, adding: “The people of occupied Kashmir are fighting against the tyranny of Modi and the people of Azad Kashmir are fighting against the economic crises created by this incapable Prime Minister Imran Khan.”