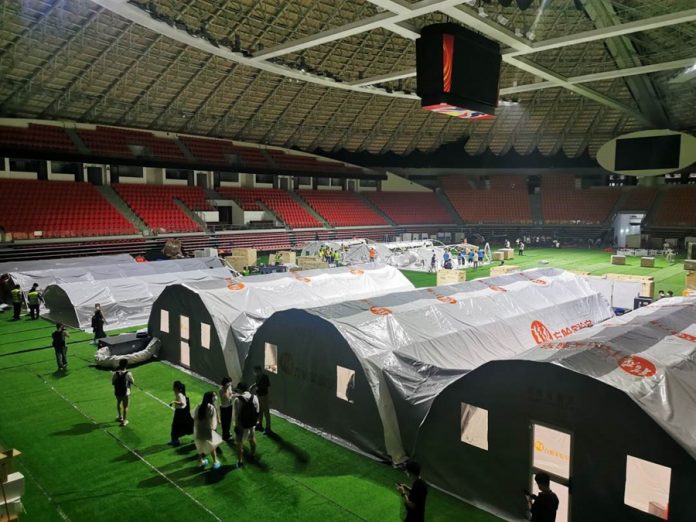 Since it found new locally transmitted COVID-19 cases in late May, Guangzhou, capital city of south China’s Guangdong province, has launched the most extensive nucleic acid testing campaign among all cities in the world. From June 4 to 6, the city collected nearly 18.7 million nucleic acid samples.
Research institutes and sci-tech companies in Guangzhou have provided a vast quantity of advanced technological products and greatly supported the city in epidemic prevention and control, said Sun Xiang, deputy head of Guangzhou Municipal Science and Technology Bureau, at a news briefing on June 9.
Guangzhou is home to more than 5,500 bio-pharmaceutical enterprises, ranking third among cities in China. Of these bio-pharmaceutical enterprises, over 1,000 are high-tech companies, and many are leading companies in niche markets of the biomedicine industry.
KingMed Diagnostics, a Guangzhou-based medical diagnostic information services provider, is able to test over 350,000 tubes of nucleic acid samples in this city on a daily basis, setting a new record in the world.
The company has accumulatively tested a total of over 80 million samples so far, becoming the world’s highest ranked institution in terms of the number of tests completed.
It has been confirmed that the recent resurgence of local COVID-19 infections in Guangzhou was triggered by mutated virus strains first found in India, which feature a shorter incubation period, faster transmission and higher viral load.
For the mutated virus strains, Guangzhou sci-tech companies have efficiently completed the research and development of more accurate testing kits.
Daan Gene, a biomedical high-tech enterprise in Guangzhou, developed a testing kit that can accurately identify the coronavirus variant first discovered in India based on point mutations in gene sequences with high sensitivity and specificity.
Wondfo, a Guangzhou company focusing on the research and development, production, and sale of point-of-care testing products, has rolled out a testing kit which can detect a wide variety of COVID-19 variants, including the Alpha, Beta and Delta variants.

To further improve the efficiency in nucleic acid testing, an air-inflated lab was put into operation at the Guangzhou Gymnasium in the city on June 1. It is the first of its kind in Guangdong province.
Operated by KingMed Diagnostics, the air-inflated lab, together with mobile testing vans and other facilities, has formed a highly efficient testing model, with the daily testing capacity reaching 350,000 tubes.
If employing a 10-in-1 mixed testing approach, which means put swab samples collected from 10 people in one tube for nucleic acid detection, and then inform the 10 people to undergo separate isolation and testings to further identify the carrier of the positive sample if a 10-in-1 sample is positive, the air-inflated lab and its complementary facilities can test a maximum of 3.5 million samples on a daily basis.
After the COVID-19 resurgence, Guangzhou has locked down many neighborhoods for epidemic prevention and control, which poses a challenge for guaranteeing the supply of daily necessities.
As one of China’s new generation of national AI innovative development pilot zones, the city has given full play to AI companies in supplying daily necessities.
Many companies, including WeRide, Pony.ai, Baidu and JD.com, sent their autonomous vehicles to locked-down areas, effectively tackling problems in the transportation of supplies.
Meanwhile, relevant government departments in Guangzhou have adopted robots that can take elevators to bring supplies upstairs to residents in time, thus solving the problem of manpower shortage in the delivery of living materials to residents.
“This is the first time that China, and even the world, adopts autonomous driving technology in anti-epidemic emergency,” said Chen Jianhua, chief economist at the Guangzhou Municipal Industry and Information Technology Bureau.
Driverless vehicles have been used in Baihedong and Zhongnan subdistricts, both high-risk areas in Guangzhou.
As of June 8, a total of 23 autonomous vehicles and 13 self-driving logistics vans had been used in the locked-down areas of Guangzhou, accumulatively transporting 64.2 tons of supplies.