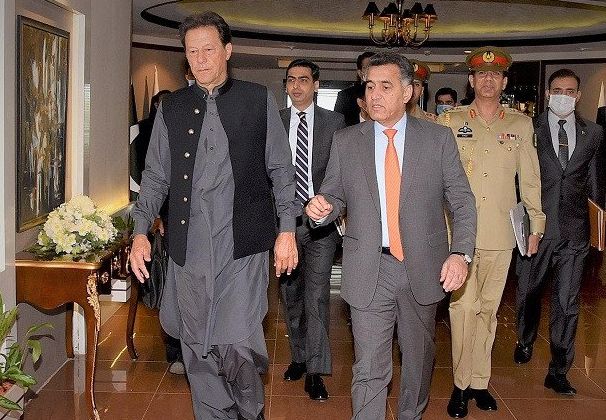 ISLAMABAD: Prime Minister Imran Khan on Wednesday visited headquarters of the Inter-Services Intelligence along with senior federal ministers where he was briefed on the Afghan peace process. Imran Khan was welcomed at the headquarters by DG ISI Lieutenant General Faiz Hameed. The prime minister chaired a meeting of the National Intelligence Coordination Committee at the ISI headquarters which was attended by heads of intelligence agencies, Intelligence Bureau, Federal Investigation Agency, and senior members of the federal cabinet “Those accompanied the prime minister in the meeting included Information Minister Fawad Chaudhry and Interior Minister Sheikh Rasheed,” a handout issued regarding the meeting said. The prime minister was given a detailed briefing on enhancing intelligence cooperation as he expressed his satisfaction over the performance of the National Intelligence Coordination Committee. The sources shared that the prime minister was also briefed on progress in the Afghan peace process. The prime minister has formed a special committee aimed at dealing with security issues, the sources said adding that the body would include Fawad Chaudhry and Sheikh Rasheed besides also having representation from law enforcement authorities (LEAs). They said that the body would help in strengthening coordination in security issues. On May 24, Prime Minister Imran Khan visited headquarters of the Inter-Services Intelligence (ISI) along with federal ministers and other government functionaries. In April last year, Prime Minister Imran Khan along with Chief of Army Staff General Qamar Jawed Bajwa paid a visit to the headquarters of the Inter-Services Intelligence in the capital. They were received by ISI Director General Lieutenant General Faiz Hamid, according to the PM Office. A comprehensive briefing covering the entire spectrum of internal and external challenges was given to the premier during the visit. He was also briefed on the impact of the ongoing coronavirus crisis. The prime minister emphasized that no effort would be spared for the security, integrity, and sovereignty of Pakistan. He appreciated the sacrifices and contributions of the Inter-Services Intelligence being a superior state intelligence agency.