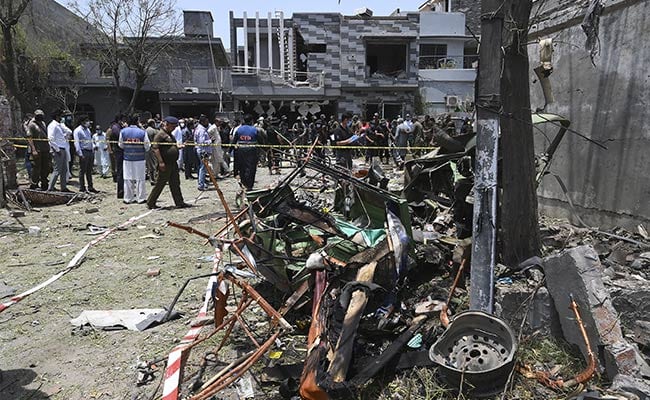 LAHORE:  At least three people were killed, while 24 others sustained injuries when an explosion took place in the city’s Johar Town area, with the provincial police chief believing police were the target. Rescue, police, and bomb disposal teams reached the site of the incident soon after the blast. Witnesses said the windows of nearby houses and buildings were shattered in the explosion. In addition, one of the buildings was severely damaged due to the intensity of the blast. Several cars parked close to the buildings were also damaged.  The injured, 21 so far, were shifted to Lahore’s Jinnah Hospital via private cars and auto-rickshaws for treatment. Three persons succumbed to their injuries during the treatment, the medical superintendent of the hospital said.  The Jinnah Hospital management has asked people to come forward and donate blood for the injured, adding that wounded are being treated at the hospital.  A police officer, a woman, and two children were among those injured by the blast. The injured are in critical condition due to the burns caused by the blast.  Such was the intensity of the blast that its sound was heard even in faraway areas. However, the nature of the blast has not been ascertained yet.  An eyewitness told  that an unidentified person parked a motorcycle near the house, which later exploded. Police have cordoned off the area for further investigation while traffic has been redirected.