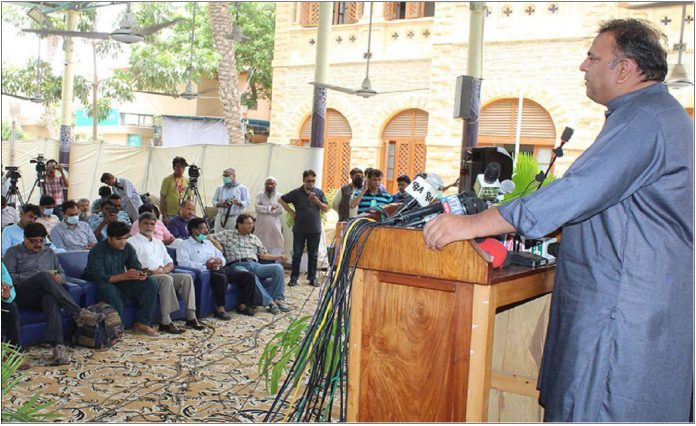 KARACHI: (Hannan Ali Narejo) Federal Minister for Information and Broadcasting Fawad Chaudhry has lashed out at Sindh government saying there is in fact no democratic government in Sindh, it’s just a dictatorship over there. The federal minister was talking to media outside Karachi Press Club on Sunday. Fawad Chaudhry lamented that there was no democratic government in Sindh, ‘there is the only dictatorship in Sindh,’ he added. He reiterated his plea to the Supreme Court to implement Article 140A of the Constitution in the province. He stated that it was being said that the PTI won in Karachi ‘but they don’t consider the fact that under the 18th Amendment, funds are being provided to the whole province.’ He regretted that PPP used to be a national party. ‘Today PPP Chairman Bilawal Bhutto Zardari raises his voice against Punjab accusing it of stealing water.’ He said when the federal government demanded the data of inflow and outflow of water then they ran away. He said PPP itself stole water and diminished party position from a national party into a provincial party. He said PPP days were numbered. He was hopeful that PTI would form next government in Sindh. He said Prime Minister Imran Khan would start his next election campaign in Sindh. He lamented the PPP had been ruling Sindh for more than a decade. ‘But look at the state of Sindh. What has become of it,’ he added.