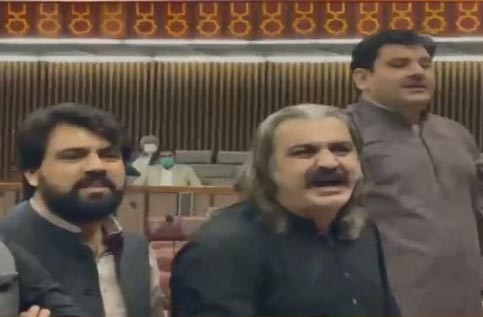 ISLAMABAD: The Lower House of the Parliament descended into chaos on Tuesday after the treasury and opposition members come to blows during Leader of the Opposition Shehbaz Sharif’s speech. As soon as the PML-N president started speech during post-budget 2021-22 NA session, the government and opposition lawmakers came face-to-face. Special Assistant to Prime Minister Ali Nawaz Awan and PML-N MNA Rohail Asgar exchanged heated words during the NA session. The lawmakers belonging to both parties – PML-N and PTI – can be seen in a video clip throwing budget 2021-22 books on each other. SAPM Ali Nawaz Awan talking to a local news channel siad that PML-N Rohail Asgar first hurled abuses on PTI lawmakers due to which the session of the Lower House turned chaotic. Speaking on the floor of the National Assembly, Pakistan Muslim League-Nawaz (PML-N) President Shehbaz Sharif lashed out at the Pakistan Tehreek-e-Insaf (PTI) led government over what he said rising inflation and unemployment in the country. Addressing the National Assembly session, Shehbaz Sharif said that the unemployment rate rose to 16 per cent and inflation was touching the highest level in the country. Talking about the promise made by Prime Minister Imran Khan, the PML-N president said that the entire nation was still waiting for the 10 million jobs. He maintained that over 5 million people have lost their jobs during the past three years. Shehbaz Sharif said that the county’s trade deficit widened to over 10,000 billion during the past three years. He maintained that the government imposed taxes over Rs 1200 billion in three years. The total size of Pakistan’s economy shrieked from $313 billion to $296 during the tenure of the PTI-led government, he added. The house was then adjourned till Wednesday.