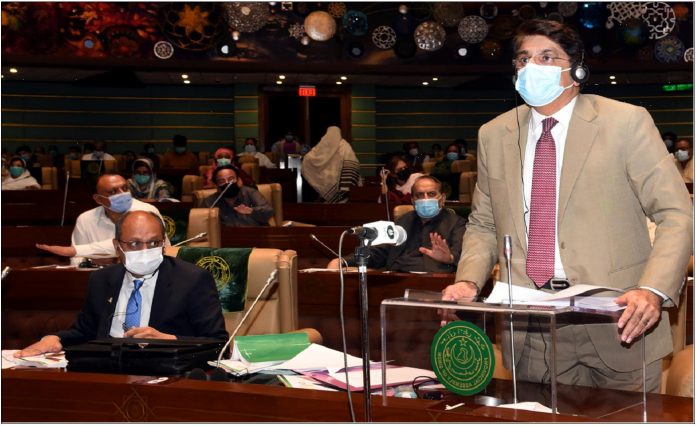 KARACHI: Sindh Chief Minister Syed Murad Ali Shah, who also holds the portfolio of Finance Minister, presented the budget of the province for the next fiscal year 2021-22 on Tuesday amid ruckus from the opposition benches. The total outlay of the budget for the province is estimated at Rs1.477 trillion, witnessing an increase of 19.1 percent from the previous year. The total receipts of the province for Financial Year 2021-22 are estimated at Rs.1.452 trillion as against a budget estimate of Rs.1.22 trillion for CFY, showing an overall increase of 19 percent. During the budget speech, Chief Minister Murad Ali Shah said that the development outlay for the budget is estimated at Rs329.032 billion, witnessing an increase of 41.3 percent from the previous year. “The development expenditure includes Rs.222.5 billion for Provincial ADP and Rs.30.0 billion for Districts ADP, foreign project assistance of Rs.71.16 billion and Rs.5.4 billion from Federal PSDP Grant for schemes being executed by Government of Sindh.” In FY 2021-22, 1033 schemes have been identified for completion in the first and second quarter and maximum resources will be provided for their timely completion. He announced a 20 percent increase in salaries of the government employees besides increasing the minimum wage from Rs 17,000 to Rs.25, 000. “Other than the police constables, an allowance has been introduced for the government employees,” he said. Murad Ali Shah said that the education budget was raised by 13.5 percent for the next year, earmarking Rs277.56. “Rs26 billion has been earmarked for development in the education sector,” he said. The chief minister said that Rs172.08 billion have been allocated for the provincial health sector, including Rs24.73 for tackling infectious diseases, Rs 8.2 billion for PPHI, Rs2 billion for expansion of Indus Hospital, and Rs7.12 billion in terms of a grant for SIUT. “Rs18.50 billion have been earmarked for development projects in the health sector,” he said. Rs119.97 billion was earmarked for maintaining the law and order situation in the province, he said besides also announcing an Rs7.64 billion for the transport department that also included the purchase of 250 diesel hybrid electric buses. The transport and mass transit department also has an allocation of Rs8.2 billion in the provincial ADP. The government also allocated Rs82 billion for local councilors and Rs 25.5 billion for the uplift projects in the local bodies department. Murad Ali Shah announced earmarking Rs3 billion for industrial development through small and medium-sized enterprises (SMEs), Rs9,420 million for low-cost housing units. Earlier in the day, the Sindh cabinet on Tuesday approved the provincial budget for the fiscal year 2021-22 with an overall outlay of Rs1.47 trillion.