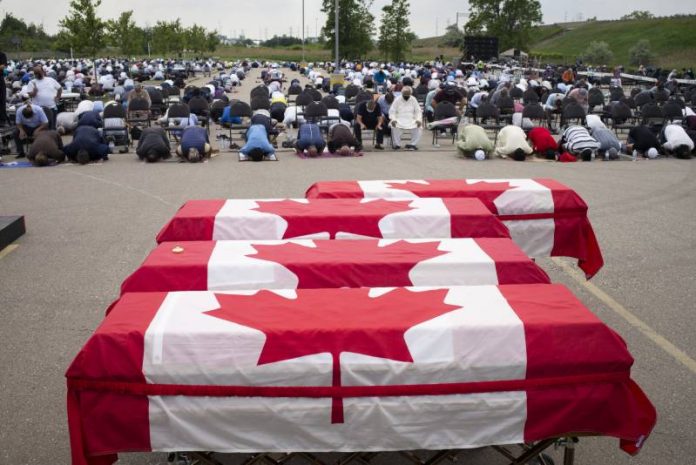 ONTARIO: Several hundred people gathered in London, Ontario on Saturday to pay homage to a Pakistani Muslim family deliberately mowed down by the driver of a pick-up truck, in an attack that has shocked Canadians and which Prime Minister Justin Trudeau denounced as “terrorist.” Four members of the Afzaal family — a man and his wife, their teenage daughter and his mother — were out for a walk in their London neighbourhood Sunday last when a 20-year-old Canadian white man in a black pickup truck drove into them on purpose, according to authorities. A fifth family member, a nine-year-old boy, was seriously injured. On Saturday, hundreds of people filled a large parking lot and a football field next to the London Islamic Centre, where a private ceremony was held, to join in a public remembrance around the family’s four caskets, each covered with a Canadian flag. “The very fact that their coffins are draped in the beautiful Canadian flag is a testimony of the fact that the entire Canadian nation stands with them,” Pakistan’s ambassador to Canada, Raza Bashir Tarar, told the crowd. The ceremony, with brief remarks and prayers, was broadcast live on major Canadian networks. “We are not alone in our grief,” said Ali Islam, an uncle of Madiha Salman, one of the victims. He stressed that the outpouring of support “has been the first step towards finding a way to heal.” “We realized that our extended family was much larger than we could have ever imagined.” Another speaker at the event, Sajid Ali Mohamed, noted that the attack on the Muslim family has been described as terrorism, instead of being blamed on mental illness. “If it’s not a turning point, at least it’s a nudge in the right direction,” he said. The funeral cortege then headed to a cemetery — as people lined the route in a show of solidarity — for the private burial of Salman Afzaal, 46, his wife Madiha, 44, their daughter Yumna, 15 and Salman’s mother Talat, 74. Many people wore either green ribbons, in support of the Muslim community, or mauve ones, Yumna’s favourite colour.