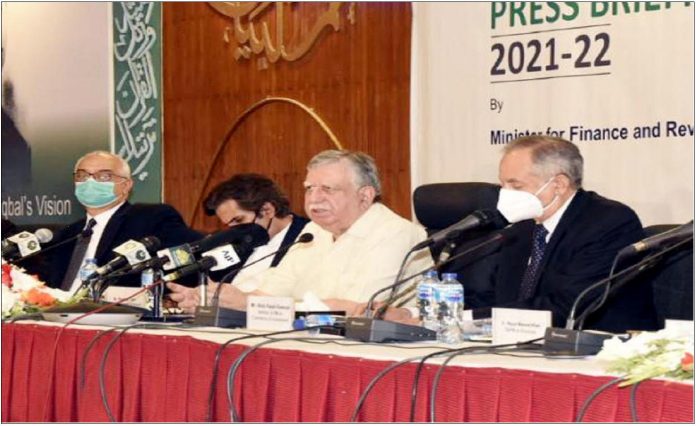 ISLAMABAD: Speaking at his post-budget 2021-22 press conference on Saturday, Finance Minister Shaukat Tarin stressed the need for jacking up revenue collection by taking the country’s exports-to-GDP ratio up to 20 per cent from the current 8pc. The first issue is that we don’t have enough revenue, the minister said. We have to enhance the tax-to-GDP percentage to twenty per cent over a period of seven to eight years, he added. The government is compiling data, including that related to mobile phone and electricity bills of people, in a bid to broaden the tax next, he maintained. Our focus is to bring more people into the tax net instead of imposing more taxes on the people already paying taxes, he added. Tarin announced that the government will bring in a prize scheme to encourage people to demand proper receipts for purchases they make from retailers. He added the move would help in documentation of the economy. He said some 10,000 points of sale (PoS) were currently under use but their number would be increased to 60,000. He said the government expects to collect Rs100bn to Rs150 bn additional revenue through the PoS system. The minister explained the tax collection target of Rs5.8 trillion has been set for the next fiscal year, which he hoped, will be achieved through innovative approach, including the use of latest technology. He said the PSDP has been enhanced significantly to take the country towards sustainable growth. He highlighted that the budget 2021-22 focuses on improving the lot of the poor and ensuring sustainable economic growth through incentives for various sectors including agriculture, industry and housing. Poor families will be given loans of up to Rs2 million to build their own houses beside Rs500,000 interest free loans for business, Finance Minister Tarin said. They will also be given health cards and one member of each family will be imparted technical training, he added. He said different sectors, including the agriculture and industries, have been given tax concessions and incentives in the budget to boost the economic growth. Taxes on the IT have been rationalised to exploit its full potential and enhance its exports, he added. Tarin said duties on almost all raw materials have been abolished to strengthen the local industries and cut down on imports, adding the rates of cars below 850cc engine size will come down after tax concessions given to these automobiles. He clarified that the government is not going to impose any tax on mobile phone calls, SMS and internet data. A proposal in this regard was mooted but the federal cabinet rejected it, he added.