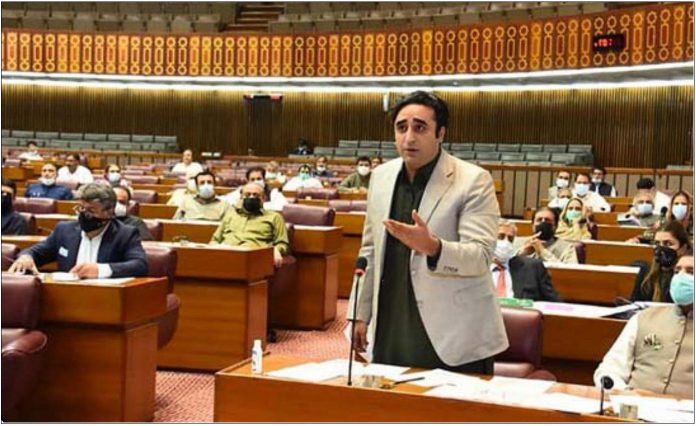 KARACHI:Pakistan People’s Party (PPP) Chairman Bilawal Bhutto Zardari said on Thursday that the budget Pakistan Tehreek-i-Insaf (PTI) government was going to present tomorrow (Friday, June 11) was not for the masses but for appeasing government’s allies. In a statement, he categorically stated that PPP refuses to accept the ‘selected’ government’s ‘selected’ budget. He accused Prime Minister Imran Khan of causing the loss of Rs1, 000 billion to the national exchequer only by making changes in the interest rate. “‘Selected’ Prime Minister Imran asked some ‘selected’ investors to send $2 billion to Pakistan from abroad, and benefitted his friends by fixing the interest rate at 13.25 percent and later return this money,” Bilawal alleged, and asked the prime minister as to who were his friends who had sent him $2 billion and thus was caused the loss of Rs300 billion to the national exchequer. PPP chairman regretted that despite the fact that the IMF had asked the government to fix the interest rate at 12 percent, the ‘selected’ prime minister increased it to 13.25 percent only to benefit his blue-eyed boys. Bilawal called for a parliamentary inquiry into what he called a case of ‘mega corruption’ under the PTI government. “Imran Khan and his associates who had plundered the national exchequer will not be allowed to go scot-free,” he said, and vowed that PPP would hold the PTI government accountable for each and every penny.