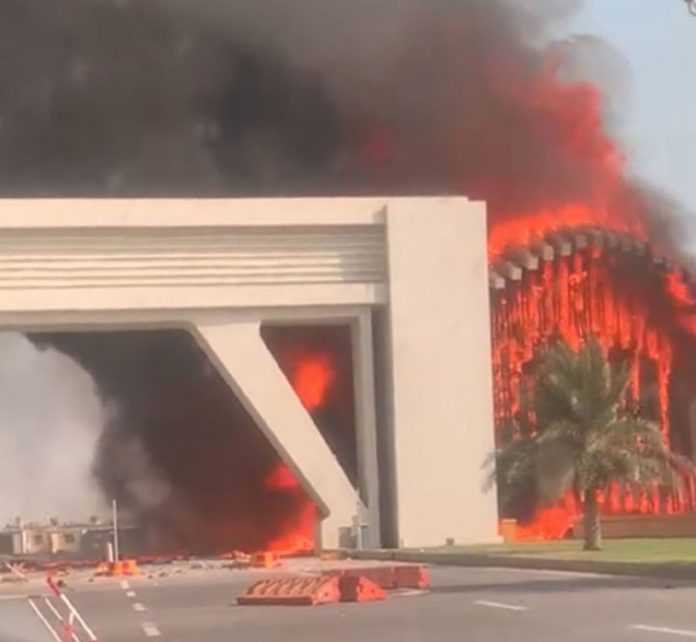 KARACHI: Hundreds of protesters attacked Bahria Town Karachi on Sunday and set fire to several shops and vehicles in the housing society, the police and residents said. A large number of protesters were staging a sit-in outside the housing society off the Super Highway. They were protesting what they say their forceful eviction from their ancestral lands in the vicinity. A heavy contingent of police was on the spot to deal with any untoward situation, while the Bahria Town management sealed the entrance with containers. But the protesters breached the barricaded gate and entered the housing society. A Suzuki car showroom and a fast food joint were among the establishments torched by the protesters, according to an eyewitness. The protesters looted at least two ATMs, said another resident, who wished to remain anonymous. The police managed to disperse protesters after some time. Following the arson attacks in Bahria Town, the Karachi Water and Sewerage Board imposed an emergency at its Safoora hydrant. KWSB MD Asadullah Khan said they had dispatched several water tankers to the gated community on Super Highway. The Sindh Action Committee, an alliance of nationalist parties in the province, gave the call for the protest against alleged hostile takeover of some goth lands by the Bahria Town management. The committee comprises Qadir Magsi, Jalal Mehmood Shah, Ayaz Latif Palijo and other Sindhi nationalist leaders. The Sindh Indigenous Rights Alliance, which has led several such protests, supported the call too. It was attended by residents of the nearby villages, who say they are being forced to give up their lands. “As soon as the protest turned violent, we withdrew all our members,” Sira’s Hafeez Baloch told. “We were not part of what happened there. Members of the Sindh Action Committee might be involved in it.” The alliance has been striving to save lands of the indigenous people for the last eight years. Bahria Town officials often visit nearby goths and ask the residents to vacate them, according to Baloch. They have offered to financially compensate the residents but the villagers have refused to give up their ancestral lands. The Bahria Town management is trying to takeover lands in Noor Mohammad Gabol Goth, Usman Allahrakhiyo Goth, Hadi Bakhsh Gabol Goth and Abdullah Gabol Goth, according to Baloch. Apart from these goths, it wishes to take over private lands owned by Kamal Jokhiyo, Faiz Gabol and Ameeruddin Gabol too. Sindh Action Committee’s Qadir Magsi said those who engaged in violence had nothing to do with the protesters. “They were Bahria Town’s own people who deliberately drove the protest towards violence,” he told. “We were staging a peaceful sit-in and the Sindh Action Committee had nothing to do with the violence in Bahria Town.” Magsi said the police arrested around a dozen protesters. He demanded their immediate release. The Sindh Indigenous Rights Alliance was formed in 2015 in reaction to the Bahria Town land acquisition, which they said had affected dehs in the Malir area. The alliance was headed by Saleem Baloch who was supported by heavyweights such as then State Minister for Communication MNA Hakeem Baloch, MPA Haji Shafi Jamot of Malir’s PS-129, historian Gul Hasan Kalmatti, Jam Abdul Kareem of Malir, well-known activist Yousaf Masti Khan and former nazim Khuda Dino Shah. At the time, they had argued that the Supreme Court had in 2011 passed an order telling the government that it could not allot its land to private institutions. But the Bahria Town developments in Malir, especially Deh Langheji, came and were also in contravention to the Land Revenue Act 1967 and the Sindh Gothabad Act 1987, they had said.