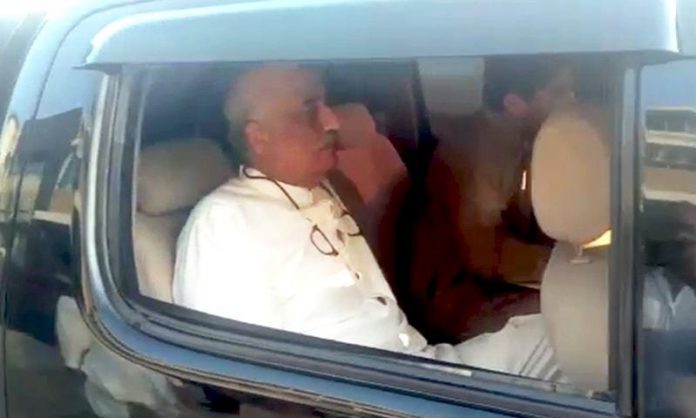 ISLAMABAD: (Jameel Awan) A three-member bench of the Supreme Court (SC), headed by Justice Mushir Alam, on Thursday heard the bail petition filed by Pakistan People’s Party (PPP) leader and former leader of the opposition in the National Assembly Syed Khurshid Ahmed Shah. During the hearing Khurshid’s lawyer Makhdoom Ali Khan said that the National Accountability Bureau (NAB) had closed the inquiry against his client in 2014, and that all tax returns filed by him were on record. Justice Sardar Tariq, on the occasion, remarked that the point that had not been raised during hearing in a high court could not be raised in the SC as well. When Justice Mushir Alam inquired from Khurshid’s counsel as to when the reference had been filed against his client and when he was arrested, the lawyer replied that the reference had been filed on November 18, 2019 while the arrest had been made two months earlier on September 18, 2019. Makhdoom Ali Khan further said that his client had approached the high court only 30 days after his arrest. “How could the plea of ‘hardship’ be invoked for the bail when only 30 days had passed to his arrest?” he asked. Justice Tariq replied why not the case should be sent back to the high court. “Raise these points of delay in the completion of trial, merit and hardship there. Even then if the high court does not grant bail, then you may come back to the apex court,” the judge said, and added the court did not want the high court’s doors closed for Syed Khurshid Ahmed Shah. “If we quash PPP leader’s bail petition right now, he would be left with no legal option,” Justice Tariq remarked. On Makhdoom Ali Khan’s asking for a day’s time to consult his client on the matter, the court adjourned hearing of the case till Friday. The SC also adjourned the hearing of Syed Khurshid Ahmed Shah’s son’s application for pre-arrest bail till today while the cancellation of bails of former opposition leader’s wives would be taken up for hearing later.