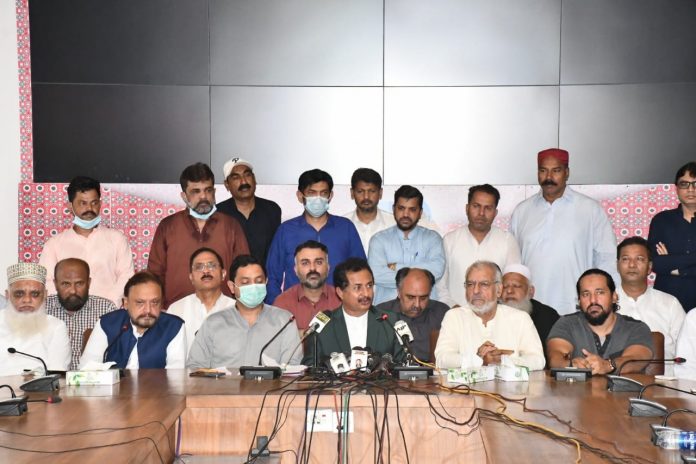 Karachi, June 02: Pakistan Tehreek e Insaf PTI Vice President and the leader of opposition in Sindh Assembly Haleem Adil Sheikh has said that his party would not tolerate excesses with the trader community of megacity Karachi.According to details, a delegation of Karachi traders met with a delegation of PTI led by Haleem Adil in the office of the leader of opposition in Sindh Assembly.The traders’ delegation was comprised of Atiq Mir, Sharjeel Goplani, Jameel Piracha, Waqas Azam, Ahmed Shamsi, Abdul Majeed Noorani, Taib Siddiqui, Abdul Khaliq, Shahid Mandia, Muhammad Arif, Muhammad Aslam Arain and others. The PTI delegation included PTI Karachi president Khurram Sherzaman, MPAs Raja Azhar, Shahnawaz Jadoon, and PTI leader Naeem Adil Sheikh.The traders expressed their reservations about brutal lockdown of the Sindh government.Later, addressing a joint press conference, Haleem Adil said that now if anyone harrassed a trader we will break his legs. He said after 6pm the police start its own lockdown and heavily fine traders for opening shops.He said Sindh chief minister is the head of Sindh police. He said the provincial government puts burden on NCOC when it suits them and bypass the NCOC when it suits them.He said trade is open in whole Pakistan but law in enforced in Karachi only after 6pm.He said due to the timely efforts of the federal government, today Pakistan is facing India like situation. He said our poor people will die of hunger if a strict lockdown is slapped.Haleem Adil said that the Sindh government is trying to scandalise the NCOC. He said any conspiracy against traders is a conspiracy against Pakistan. He said the PPP is putting the security of state to stake for its vested political interests. He said some steps of Sindh government are not in line with the NCOC announcements.He said like fake bank account now fake fine challans are made. It would be seen if this looted money goes to CM House or Bilawal House.Haleem Adil said we are with the traders and nobody would be allowed to harrass them. He said the traders should be given permission to keep open their shops till 8pm.

He said we are in parliament due to the vote of Karachi. He said if the traders take to streets it would mean we will also take to streets.He said 40 percent votes in Sindh are obtained by the opposition. He said IGP and chief secretary are responsible for implementing the decisions of NCOC and if they cannot do it, they should go home. He said he would recommend the federal government to transfer both these officers.He said now bandits have got a free hand in Karachi too. He said the federal government is not in favour of Governor Rule. He said Sindh government is yet to supply coronavirus vaccine to people.Khurram Sherzaman said on the occasion that the Sindh government is creating a state within state. He said today the business community is demanding Governor Rule in Sindh.Trader leaders Atiq Mir and others said due to closure of markets at 6pm they are sustaining huge losses. They demanded of Prime Minister Imran Khan to slap Governor Rule in Sindh. They warned that if their problems are not resolved and their demands not meet they reserve the rights of protest.