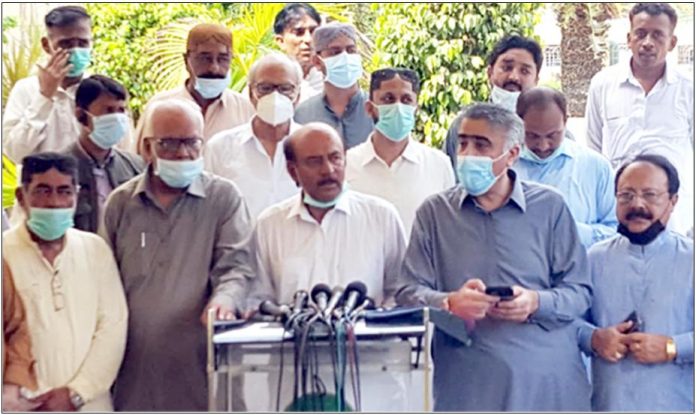 KARACHI: Pakistan People’s Party (PPP) has announced district-wise protests over ‘water crises’ from June 3 arguing Sindh is drying up and alleged federal government is not providing due water share to the province. PPP Sindh President, senior minister for Parliamentary Affairs, Food and former speaker of Sindh Assembly Nisar Ahmed Khuhro shared the schedule of protests that include protest will be held in Larkana Division on June 3, Hyderabad Division on June 5, Mirpur Khas Division on June 7 in, Sukkur Division on June 9, Shaheed Benazirabad Division on June 11 and last protest on June 15 in the Karachi Division. “Protests will be held in the district headquarters of all divisions,” Nisar Khoro announced. “The federal government is not providing employment as the matter of releasing water from Kotri to downstream is still unresolved.” Khuhro claimed that rice crop sowing has also been delayed, which used to be sown on May 1st in Thatta. The PPP leader said that water had been supplied to the rest of the province by May 5 annually but despite Tarbela and Mangla Dams, Sukkur Barrage has only 48,000 cusecs as Sukkur Barrage cannot be opened till 87,000 cusecs of water arrives.’ He was talking to a media person after the PPP Sindh Executive Committee meeting in which District Divisional Presidents participated and discussed problems in the province. “We had reservations about the 1991 water agreement,” Nisar Khuhro added. It may be mentioned that the PPP protest has been announced just after the Irsa announced that it has increased the water share of the Sindh province by 35 percent as the water inflow situation has been improved. PPP Sindh alleged that the IRSA was acting as the B-team of the PTI’s federal government. Water being released illegally in Chashma Jhelum and Taunsa-Panjnad link canals, the PPP session alleged. “Sindh’s water being stolen by pumping it out from Taunsa to Guddu,” the PPP session claimed. The Sindh People’s Party demanded an immediate closure of the Chashma Jhelum and Taunsa Punjnad canals and providing just share of the river water to Sindh.