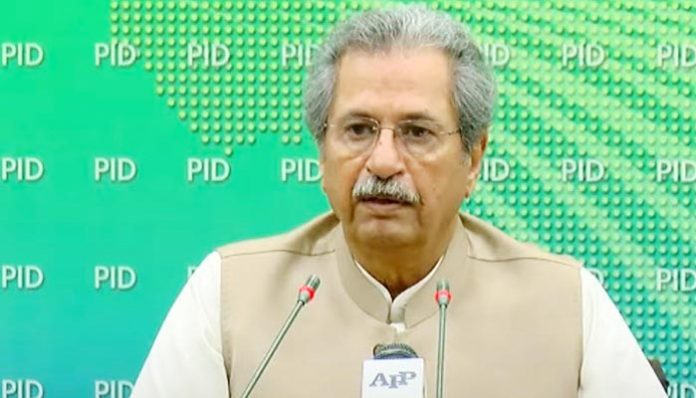 ISLAMABAD:Federal Minister for education Shafqat Mehmood on Thursday said that Pakistan Tehreek-e-Insaf (PTI) was completely united under the leadership of Prime Minister Imran Khan and those trying to create rift in the party would not succeed in their negative designs. ”No rift within the party members and none of the PTI members was going to anywhere”, he said while speaking to a private news channel.”We are the party and we will remain in it. If we don’t stay then where will we go,” he asked. “We all party members have same identity of PTI otherwise we have not separately recognizable, he said, adding, we all have respect just because of Prime minister Imran Khan”. He said as per the vision of Prime Minister Imran Khan, the government has just adopted a policy of accountability for all that would hold every person within or outside the party accountable for his actions. He said Imran Khan was not blackmailed in past and would never be blackmailed in future as well, adding, he boldly stand for his clear stance on corruption where he will never compromise on any cost. Mehmood said accountability is the main slogan of the PTI and ours accountability is equally important as the accountability of others. “Those critics who are pointing fingers at the government would be answerable for their actions as well,” he warned”Imran Khan is our captain, and we will present our grievances only in front of him, he said, adding, opinion differences is beauty of democracy and every person have right to speak”. He further said that government of Pakistan Tehreek-e-Insaf (PTI) has no pressure from Jahangir Tareen and any other political leader.