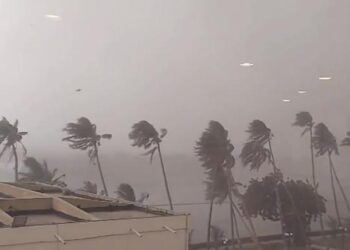 KARACHI:Parts of Karachi on Tuesday afternoon received rainfall with dust storm under the influence of Arabian Sea Cyclone Tauktae, The rain lashed Karachi’s Surjani Town, New Karachi, Yousuf Goth, Taisar Town and Khuda Ki Basti. A spell of the severe hot weather in the port city comes to an end after rainfall with dusty winds. Director meteorology department in a statement said that the cyclone have outer reach to our area, which has caused this dust storm. He predicted rainfall in other areas of Karachi apart of the North Karachi. A dust storm also hit NIPA, Gulshan Iqbal and Gulzar-e-Hijri Scheme-33. The sizzling weather spell will come to an end after the inclement weather in the city, the met official said. Earlier, Pakistan Meteorological Department in its final alert with regard to Cyclone Tauktae said that the Very Severe Cyclonic Storm “TAUKTAE” after intensifying into an Extremely Severe Cyclonic Storm crossed Indian Gujarat last night, weakened into a Severe Cyclonic Storm laying over Rajasthan, India. A few dust/thunderstorm-rain accompanied with gusty winds of 30-50 Kmph may occur in Tharparker and Umerkot districts during next 12 hours. Hot and dry weather will continue today in Karachi, Hyderabad, Shaeed- Banzirabad, Badin and Mirpurkhas districts. Sea Conditions will remain rough till this evening and fishermen of Sindh are advised to avoid going into deep sea. They can resume their activities from tomorrow, the weather alert added. Arabian Sea Cyclone Tauktae, packing ferocious winds and threatening a destructive storm made landfall in western India. Cyclone Tauktae, according to press reports, is the biggest to hit western India in 30 years, swept over the Arabian Sea with Gujarat state.