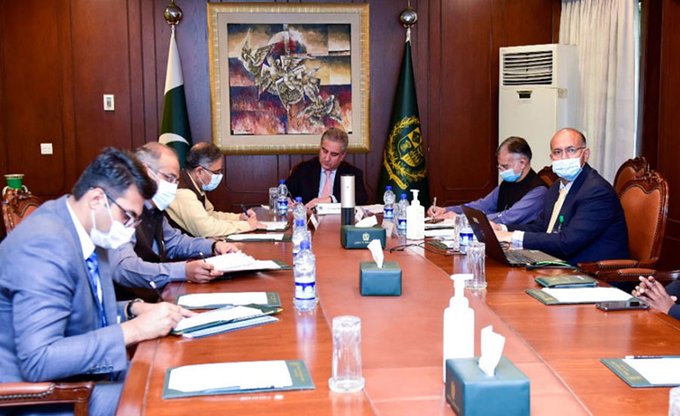 ISLAMABAD: Foreign Minister Shah Mahmood Qureshi Sunday condemned Israel’s massacre in Gaza in strong words, urging the international community to take steps to stop the genocide in Palestine immediately.  The foreign minister was addressing an emergency meeting of the Organisation of Islamic Cooperation (OIC) where he lambasted Israel for its tyrannical measures, which include bombing Gaza and killing scores of innocent children.  “Israel is violating human rights laws in Gaza,” slammed the foreign minister. “The attack on the Palestinians is a violation of international law as well.” Blaming the Israeli Army for killing unarmed Palestinians, the minister said it was up to the international community to take concrete measures to stop the bloodbath in Palestine.  “Pakistan condemns Israel’s aggression in strong words,” he said. “Israel’s aggression in Gaza should stop immediately.” The foreign minister also thanked the OIC for arranging an emergency meeting to condemn Israeli atrocities in the region.  Israel continued with its deadly bombing on Sunday, as the death toll of Palestinians in Gaza surged past 140, with more than 30 children and scores of other women killed in the bombings as well.  A day earlier, 10 members of a single extended family were killed in an Israeli air strike early Saturday on the western Gaza Strip, medics in the Palestinian enclave said. The eight children and two women were killed when a three-storey building in Shati refugee camp collapsed following an Israeli strike, medical sources said. Israeli warplanes had struck multiple targets in Gaza since aerial strikes began on Monday. Speaking outside Shifa hospital in Gaza City, the father of four of the children, Muhammad al-Hadidi, had said he wanted “the unjust world to see these crimes”.”They were safe in their homes, they did not carry weapons, they did not fire rockets,” he had said of his children, who were killed “wearing their clothes for Eid-ul-Fitr”, the holiday marking the end of Ramadan. Both Hadidi and Mohammad Abu Hattab, his brother-in-law and host, were away from Hattab’s home when it collapsed. The Abu Hattabs’ five-month-old baby also survived.