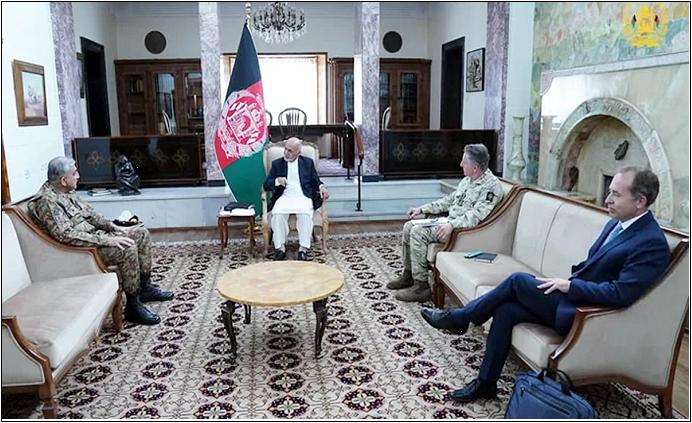 KABUL:Chief of Army Staff General Qamar Javed Bajwa and Afghanistan President Ashraf Ghani Monday exchanged views on the Afghan peace process among other matters. The meeting took place in Kabul as the army chief has arrived in the Afghan capital on a day-long visit, the Inter-Services Public Relations (ISPR) said in a statement. The ISPR said matters of mutual interest, current developments in the Afghan peace process, enhanced bilateral security and defence cooperation, and the need for effective border management between the two brotherly countries were discussed during the meeting. COAS, in his meeting with President Ghani, reiterated that a peaceful Afghanistan means a peaceful region in general and a peaceful Pakistan in particular. “We will always support “Afghan-led-Afghan-owned” peace process based on [the] mutual consensus of all stakeholders,” the army chief said. Meanwhile, the Afghan President thanked COAS for a meaningful discussion and appreciated Pakistan’s sincere and positive role in the Afghan peace process. Chief of the Defence Staff UK was also present during the meeting, while Director General Inter-Services Intelligence Lieutenant General Faiz Hamid accompanied COAS during the visit. Later, COAS also called on Chairman of the High Council for National Reconciliation of Afghanistan Dr Abdullah Abdullah and discussed matters related to the Afghan peace process. Pakistan is regarded as a key player in the Afghan peace process.
COAS Bajwa on Monday also met Britain’s Chief of Defence Staff General Nicholas Patrick Carter for talks on Afghan peacemaking, according to a statement from Pakistan’s military media wing.