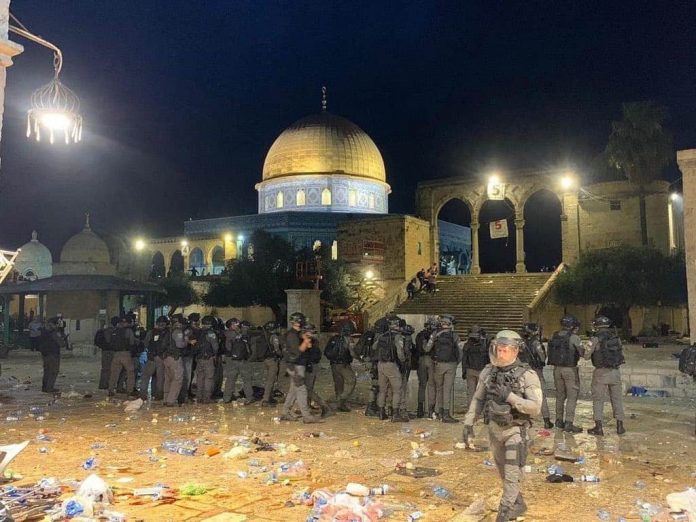 ISLAMABAD: Prime Minister Imran Khan on Sunday strongly condemned the attack of Israeli forces during the month of Ramazan on Palestinians in Al-Aqsa Mosque, The prime minister, who is currently on a three-day visit to Saudi Arabia, took to Twitter to condemn the Israeli attack on Palestinians. “Strongly condemn Israeli Forces’ attack esp during Ramazan on Palestinians in Qibla-e-Awaal, Al-Aqsa Mosque,” the prime minister said while terming it a violation of all norms of humanity and international law. He reiterated Pakistan’s support for the Palestinian people and urged the international community to take immediate action to protect Palestinians and their legitimate rights. Yesterday, Pakistan strongly condemned attacks on worshippers in Al-Aqsa Mosque by Israeli forces, which saw injuries to scores of people and draw condemnation from other Muslim countries also. In a message from the official Twitter handle, Foreign Office Spokesman Zahid Hafeez Chaudhri said that Pakistan strongly condemns attacks on innocent worshippers in Al-Aqsa Mosque by Israeli Occupation Forces. “We pray for a speedy recovery of injured, reiterate our steadfast support to the Palestinian cause and urge the [international] community to take prompt action to protect the Palestinian people,” the foreign office said. At least 205 Palestinians were injured in the night-time clashes at Islam’s third-holiest site and around East Jerusalem, Palestinian medics and Israeli police said, as thousands of Palestinians faced off with several hundred Israeli police in riot gear. Tension has mounted in Jerusalem and the occupied West Bank during the Muslim holy month of Ramadan, with nightly clashes in East Jerusalem’s Sheikh Jarrah – a neighbourhood where numerous Palestinian families face eviction.