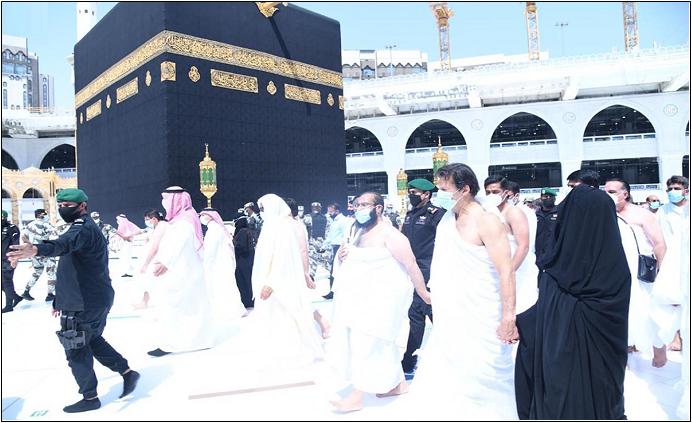 JEDDAH: Prime Minister Imran Khan on Sunday performed Umrah after he reached Makkah during his three-day visit to Saudi Arabia. The prime minister reached Makkah along with his wife and members of the Pakistani delegation to perform the ritual in Saudi Arabia. Before performing Tawaf, the doors of the Holy Kaaba were opened for Prime Minister Imran Khan, where he was allowed to witness it from inside. Yesterday, Prime Minister Imran Khan paid respect at Roza-e-Rasool (Peace Be Upon Him) in Madina Munawara and offered Navafil and Namaz-e- Maghrib in Masjid-e- Nabvi. The premier prayed for the progress and prosperity of Pakistan. Upon arrival, Imran Khan was received by Governor of Madina Munawara Prince Faisal bin Salman. PM Imran Khan was accompanied by his delegation including Foreign Minister Shah Mahmood Qureshi, Interior Minister Sheikh Rashid Ahmed, Sindh Governor Imran Ismail, KP Governor Shah Farman, Senator Faisal Javed and Punjab Minister Abdul Aleem Khan. The purpose of this visit is to strengthen bilateral cooperation while signing multiple MoUs and agreements in the fields of energy, media, prisoner exchange and others.