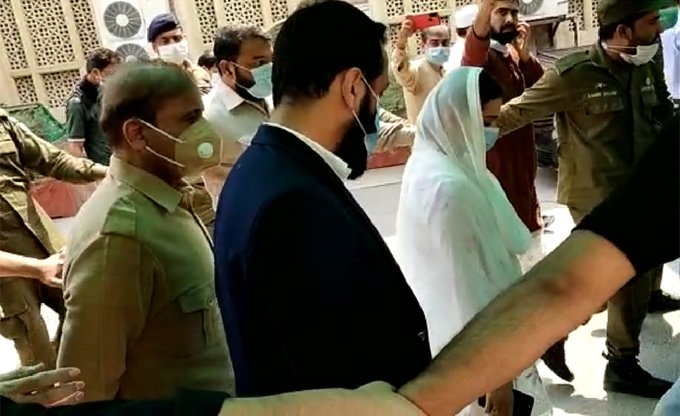 LAHORE: The Lahore High Court (LHC) on Friday gave one-time permission to the Pakistan Muslim League-Nawaz (PML-N) President Shahbaz Sharif to go abroad for medical treatment, The Lahore High Court in its conditional permission allowed Shahbaz Sharif to go abroad from May 08 to July 05. The court in its six-page written order said that Shahbaz could not be barred from travelling abroad even if his name is on the blacklist. His name is currently not on the ECL, the court said in its order while adjourning the hearing of the case for July 05. Earlier in the day, Shahbaz Sharif appeared before the court and assured the court that he would return if allowed to go abroad. Sharing his track record, the PML-N leader said that he had twice returned from an abroad visit. “Am I a terrorist that my name is included in the blacklist,” he argued and added that he is the opposition leader in National Assembly and had remained Punjab chief minister thrice. Shahbaz said that he has suffered from cancer and had to undergo medical examination twice a year. “I’ve been undergoing this treatment for last 15 years,” he said adding that during his recent incarceration, medical examination on court order has found some new complications, which he needed to get treated abroad. The PML-N president also presented his return ticket of July 03 before the court. The court after hearing the arguments from both sides reserved the verdict on the application filed by the PML-N head. PML-N leader Zubair Umar while commenting on the decision said that if there was no case against Shahbaz Sharif then there are no valid grounds to keep his name on the blacklist. He said that Shahbaz Sharif has continuously visited abroad for medical treatment. “He has been a target of media trial for years,” Zubair Umar said. While responding to a question if Shahbaz could prolong his stay abroad like his brother Nawaz Sharif, the PML-N leader said that the legal formalities have not been fulfilled in Nawaz Sharif’s matter. “Nawaz Sharif will return the day they are fulfilled,” he announced. The Lahore High Court (LHC) on April 14 has granted bail to Pakistan Muslim League-Nawaz President Shahbaz Sharif in assets beyond known sources of income case.The court granted bail to the opposition leader in National Assembly against the submission of two surety bonds of Rs5 million each.