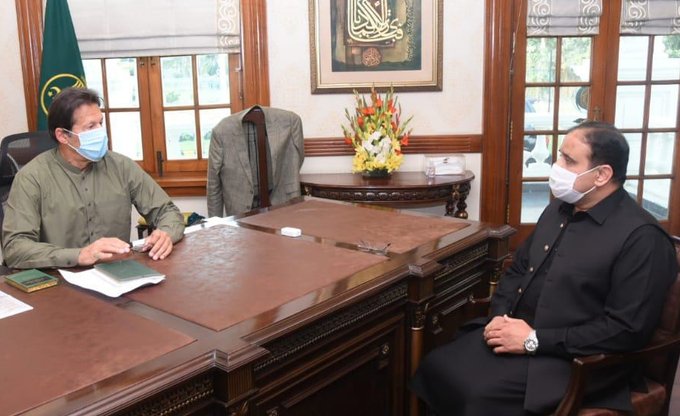 LAHORE: Prime Minister Imran Khan has sought details regarding continuous defeats of the party candidates in Punjab by-elections from Chief Minister Punjab Usman Buzdar, During a meeting with Usman Buzdar in Lahore, the prime minister sought reasons behind the defeat of the party candidates in Punjab by-polls and tasked him to improve contacts with the general public. “The next budget should carry public interest development projects,” the prime minister directed him besides also calling for bringing an end to unnecessary political intervention in institutions and district administrations. “The state institutions should be in the easy approach of the public,” he said adding that the government should adopt policies that would enable the public to give priority to the PTI over any political party. Imran Khan said that public interest should be among the foremost priority in development projects. “Better coordination and teamwork should be developed among the party cadres in constituencies where by-elections are conducted,” he said while lauding the performance of the Punjab government in past two years. The sources privy to the matters discussed during the meeting said that the chief minister also conveyed to the prime minister regarding groupings within the party. “The prime minister assured him of taking key decisions after the budget,” they said. Earlier in the day, Prime Minister (PM) Imran Khan Thursday performed the groundbreaking of the Punjab Peri Urban Low-Cost Housing scheme. The premier was accompanied by Punjab Chief Usman Buzdar and Minister of State for Information and Broadcasting Farrukh Habib. On the occasion, PM Khan was briefed about the project.