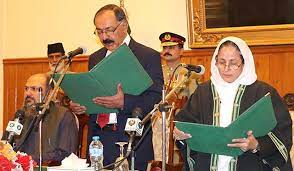 Prime Minister Imran Khan has asked the Governor of Balochistan, retired Justice Amanullah Khan Yasinzai to step down from his post. the premier wrote a letter to Yasinzai in which he said that he wants to appoint someone else in his place.
In his letter, a copy of which is available with Geo News, the premier wrote that he wanted to meet Yasinzai in person but couldn’t do so due to COVID-19.
“It has been a pleasure [working] with you, striving for the creation of a welfare state, and especially looking after the people of the province of Balochistan,” the premier wrote in the letter.
“However, given the current political situation, dexterity and deftness are needed at this juncture for a delicate balancing act to simultaneously ensure political inclusion and fulfilment of our commitment towards the people of Pakistan.”

“Above in view, I intend to appoint a new governor in Balochistan and would, therefore, request you to resign.

“This, of course, does not in any way reflect adversely on your competence or performance. It is just that the transformed political challenges Pakistan faces at present require, I believe, a change.”Prime Minister would finalise the name for the new governor of Balochistan on Monday, adding that the premier wants to appoint Zahoor Agha to the post.Meanwhile, the Balochistan Awami Party has finalised the name of Senator Naseebullah Baazi for the post.According to sources, PTI Balochistan MPs, during a meeting with Prime Minister Imran Khan in Quetta yesterday, had demanded the replacement of Yasinzai.The names under consideration by Balochistan members of the parliament for the governor’s post include PTI’s provincial president Dr Munir Baloch, party leader Humayun Jogezai, and Zahoor Agha.