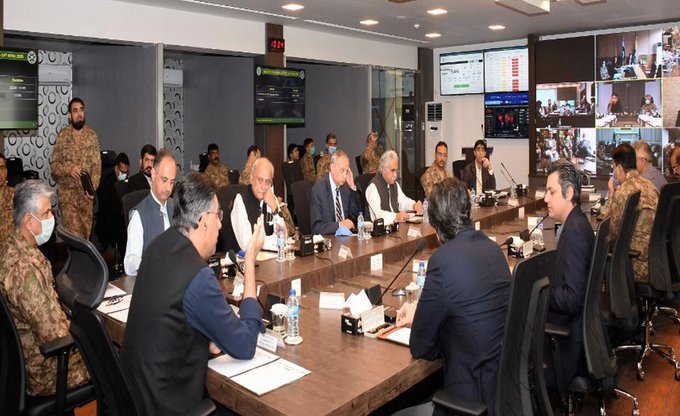 ISLAMABAD: Federal government has decided against allowing the processions of Youm-e-Ali (RA) after an NCOC meeting mulled over it in wake of the rising COVID-19 situation in the country, According to details, the decision was taken during the NCOC meeting headed by Asad Umar and attended by Lieutenant General Hamood uz Zaman, Interior Minister Sheikh Rasheed, Minister for Religious Affairs Noor ul Haq Qadri as provincial chief secretaries also joined the meeting via a video link. According to the decisions taken at the NCOC, the Youm-e-Ali processions would be banned, however, matmi majalis [gatherings] would be allowed in a limited manner. A small number of people could attend these gatherings while following COVID-19 SOPs.The decision was taken keeping in view the risk factor due to the ongoing surge in Covid-19 especially in major urban centers. The forum emphasized the need to engage the religious scholars and community leaders at provincial and district levels for the implementation of these decisions.It is pertinent to mention here that the NCOC announced six-day Eid holidays in the country amid COVID surge besides while adopting a stay home, stay safe strategy. The NCOC announced Eid holidays in the country from 10-15 May with tourism spots, public parks, and small bazars to remain close on the occasion. The details issued by the body in a notification further said that other than essential services all shops, businesses and markets will remain shut during the Eid holidays. On the other hand, bakeries, fruit and vegetable shops, grocery, medical stores, vaccination centres will remain open during the holidays.