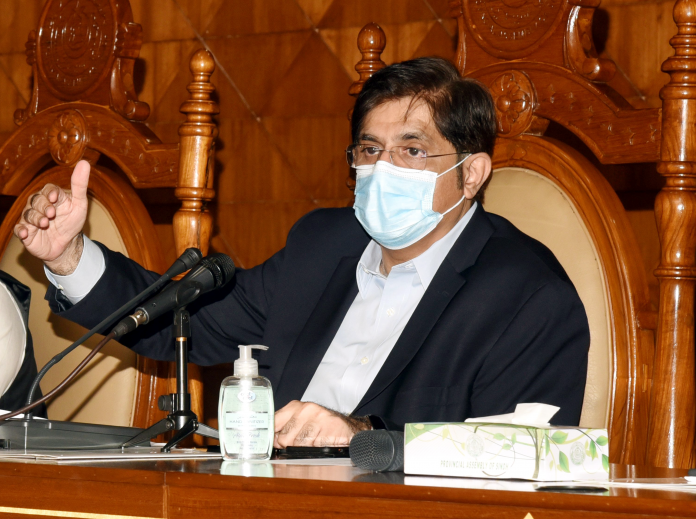 KARACHI: The Sindh government has announced to close all schools, colleges and universities in the province and decided to reduce presence of staff only to 20% in provincial government offices due to rising coronavirus cases. Talking to a press conference, Sindh Chief Minister Syed Murad Ali Shah said on Monday that all educational institutions will remain closed in the province. He said the provincial government has decided to reduce the employees’ attendance from 50% to a meagre 20% in the provincial government offices as the country battles a dangerous third wave of coronavirus. He assured that government would not send employees on leave. He said office timings will be from 9am to 2pm. Murad said private offices could keep working only with 50% staff and warned if they found guilty of calling to work more than 50% employees, their buildings will be sealed. He said at a time only five people will be allowed in a shop. And if shop owners fail to implement the SOPs, their shops will be sealed. The CM announced that inter-city public transport will be closed from Thursday, 29th April. If people want to go to their native places to celebrate Eid they could move, otherwise, they will be stuck here up till Eid. He said goods transport and industries will remain open. He banned social clubs and social activities in the province. He asked people over 50 not to go to mosques for prayers and travih. He said passengers’ medical examination will be conducted at airports. He asked the federal government to ban public transport. He said many countries have put travel restrictions on Pakistan. He was of the view that we should also close our borders. He said if the government failed to adopt strict measures, God forbid, we will also be facing an India-like situation. He said if people do not follow the SOPs, then the provincial government will introduce more strict restrictions. The CM said during the last 425 days when Covid first landed here, more than 3.5 million corona tests have been conducted and 0.2 million were positive. On Sunday, there were 952 confirmed cases in the province and 6 people died of Covid 19. So far, 4,600 people have succumbed to coronavirus. If we look into the national figures, we come to know that Balochistan conducted more than 0.2 million tests and positive cases were 21,000 whereas KP conducted 1.5 million tests. He said when compared to other provinces, the number of confirmed cases in Sindh is low. But we are scared as cases and number of fatalities are rising in the province. So, the Sindh government has decided to take its own initiatives to curb the Covid spread, he maintained. He said 21% cases are in Karachi and 16% are in Hyderabad. He said the caseload in Sukkur is also increasing. He said there are 664 beds for corona patients and 453 ventilator-fitted beds are still empty. He said the situation in Sindh is better than other provinces.