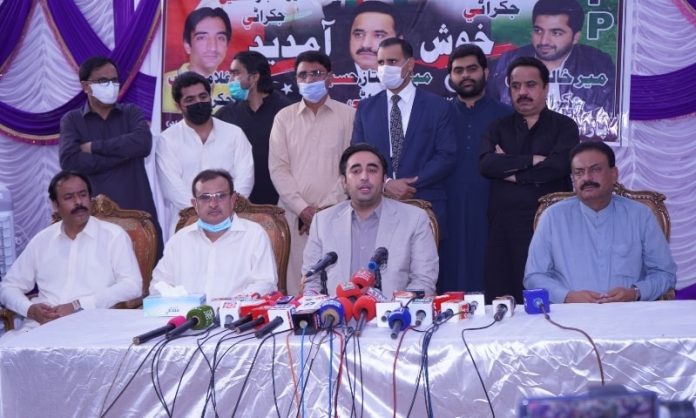 KARACHI: (Hannan Ali Narejo) Expressing concern over the rapid increase in the coronavirus cases in the country, Pakistan People’s Party (PPP) Chairman Bilawal Bhutto Zardari on Saturday said such a situation could have been avoided if the lockdown had been imposed on time. “Prime Minister Imran Khan needs to understand that economic activities could not pick up in the country unless we control the spread of the pandemic,” he underscored. The PPP chairman also expressed solidarity with the relatives of those who had lost their lives to the virus. “PPP stands by health workers as the country battles the third wave of the coronavirus,” Bilawal said. He was of the view that the situation was out of control in Punjab and Khyber Pakhtunkhwa (KP) on account of the weak response to the crisis by the governments of these provinces. He emphasized that vaccination was the only way through which people could not only get themselves protected against the pandemic but the financial crisis emanating from the lockdown could also be prevented. He also told PM Imran that he would be held accountable for each and every penny deposited in Coronavirus Relief Fund. “Mr Prime Minister, would you please tell us as to what became of the Tiger Force that you had formed to make people follow the standard operating procedures (SOPs)?” he inquired. “Has it failed to meet the objectives for which it had been constituted?” PPP chairman questioned. Bilawal said that the third of the coronavirus had managed to reach Pakistan from the UK because the airport authorities did not take pains to check the passengers arriving from that country. In a statement, Bilawal said it was unfortunate that the prime minister chaired a meeting even while he was in quarantine. “How can we expect a common man in the street to comply with the SOPs when the country’s prime minister is least bothered about it?” he asked. Bilawal said the reason why the people were not voluntarily following the SOPs was that the Pakistan Tehreek-i-Insaf government had failed to run an effective campaign for the purpose. “Other countries in the world are getting rid of the pandemic courtesy the vaccine, but here in Pakistan we almost have no vaccine,” he regretted. “If the government had wanted, it could have purchased the coronavirus vaccine in large quantities on time,” PPP chairman said, and added, “But sadly, the prime minister remained in the pursuit of procuring vaccine for free.” He further said if China had not provided Pakistan the vaccine, frontline health workers would have remained deprived of the dose. He said that it was unfortunate that Punjab health minister’s statement in which she had asked people to get them vaccinated against the disease at their own risk instilled fear in people’s hearts. “Other provinces should start emulating the way Sindh government managed to control the spread of the virus,” PPP chairman suggested.