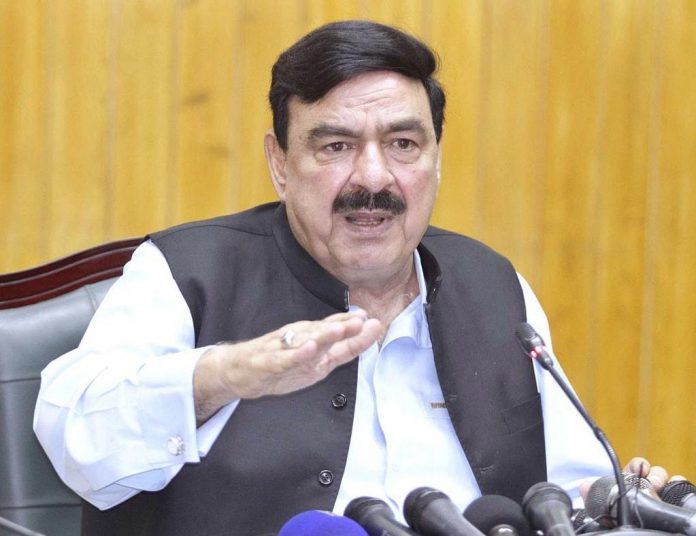 QUETTA: Interior Minister Sheikh Rasheed said Thursday the blast that took place a day earlier in the parking of a hotel, was a suicide bomb attack. The minister was holding a news conference to discuss the Quetta bomb blast from last night, which killed five and injured 12 others. Rasheed pointed towards India’s activities aimed at destabilising Pakistan, saying that during the past eight to 10 days, an estimated 250,000-300,000 social media accounts were created in India. He said these were efforts to destabilise Pakistan from within “by foreign elements”. “These foreign forces cannot see Pakistan prosper and progress,” said the minister. Rasheed said the Ministry of Interior had placed all 22 law enforcement institutions under its jurisdiction, which include the FC, Rangers, Coastal Guards and others to remain on “high alert”. He said Pakistan was a great nation and with the help of its great armed forces and intelligence agencies, will thwart all evil designs as well as conspiracies being hatched in India, against it. Updating the masses about the casualties and the wounded in the blast, Rasheed said out of the 11 who were injured, six had left the hospital after getting treated. “The rest are in hospital, out of which only two to three are in a critical state,” he said. Responding to a question, the interior minister clarified the Chinese ambassador was in Quetta for the past few days and is safe. He rejected speculation that the Chinese ambassador was at the hotel when the blast took place, saying that the diplomat was somewhere else. When asked whether there will be chaos and anarchy in the country in recent days, Rasheed replied in the negative. He said an elected prime minister, a great army and 220 million people were the guardians of the nation. “We know how to live and die for this country,” he said. The minister said a forensic investigation was being conducted into the attack, adding that so far, the terrorists have not been identified yet. The spokesperson of the Chinese foreign minister on Thursday condemned the attack that took place in Quetta. “#China strongly condemns the terrorist attack in relevant hotel in #Quetta, the capital of Pakistan’s Balochistan province,” read a tweet from the spokesperson. “China strongly condemns the terrorist attack, expresses condolences to the unfortunate victims, and sympathy to the injured,” read the statement by the Chinese Embassy in Pakistan. “Chinese Ambassador to Pakistan, Mr. Nong Rong, was leading a delegation on a visit in Quetta on the same day. When the attack occurred, the Chinese delegation was not in the hotel. Till present, no reports of casualties of Chinese citizens in the attack have been received,” it clarified. Security was tightened in the city on Thursday after a powerful blast rocked the city, in which five people died and 10 others were injured in the provincial capital, last night. When the investigation was kicked off last night after the blast, police initially said explosive material had been installed in a car that had been detonated. The Bomb Disposal Unit (BDU) had said 40-50kgs of explosives were used in the blast. “Our nation has made great sacrifices in defeating terrorism and we will not allow this scourge to rise again. We remain alert to all internal & external threats,” read the prime minister’s tweet.