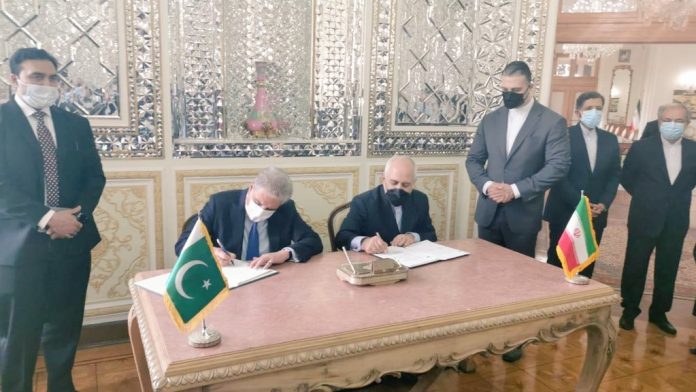 TEHRAN: Pakistan and Iran Wednesday signed a Memorandum of Understanding (MoU) for the opening of six market places at border areas of the two countries. The MoU was signed by Foreign Minister Makhdoom Shah Mahmood Qureshi and his Iranian counterpart Javad Zarif. These six market places would be established at the border between the Balochistan province of Pakistan and the Iranian province of Sistan-Baluchestan. The foreign minister expressed confidence that the establishment of border markets would be beneficial for both countries. It would go a long way in improving the economic conditions of the residents of border areas, he added. The proposal for opening of border markets was given by Prime Minister Imran Khan in a meeting with Iranian President Rouhani during his visit to Iran in 2019. Foreign Minister Shah Mahmood Qureshi called on Iranian President Dr Hassan Rouhani in Tehran. The foreign minister conveyed warm greetings on behalf of Pakistani leadership to Dr Rouhani and best wishes for the fraternal Iranian people. FM Qureshi lauded President Rouhani’s role in leading the nation during his tenure. He discussed with President Dr Rouhani the ways and means to strengthen close bilateral relations, rooted in shared history, culture, faith and language.