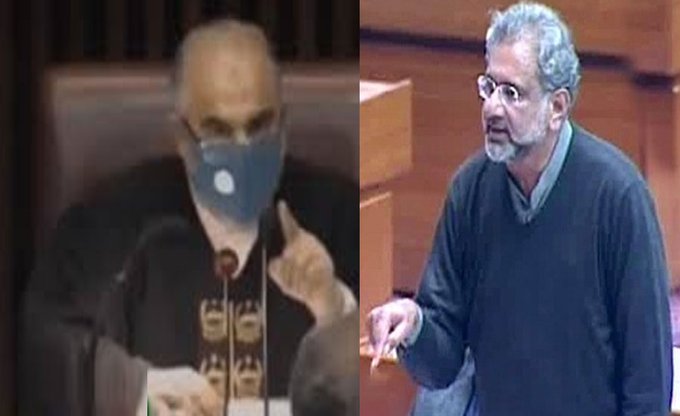 ISLAMABAD: Former prime minister Shahid Khaqan Abbasi has been served a notice on Wednesday to explain his conduct in an unpleasant incident in the National Assembly session on April 20. A letter has been issued to the MNA under the Rule 21 of the National Assembly’s code of conduct on the instructions of Speaker Asad Qaiser. “Your conduct caused hurdle in smooth holding of the house proceedings and interrupted the session,” the letter to Shahid Khaqan read. “By impeding the house proceedings you also ridiculed the office of the Speaker,” according to the letter. The letter demanded Shahid Khaqan to explain his conduct and extend an apology within seven days. “If you failed to respond, it will be deemed you have nothing to say in your defence,” the letter added. The National Assembly session summoned Tuesday to present a resolution on French envoy witnessed heated exchange of words between former prime minister Shahid Khaqan Abbasi and Speaker Asad Qaiser. While speaking on the floor of the lower house, the former prime minister hit out at the government for not taking the Opposition into confidence regarding the resolution. He also called for adjourning the session so the Opposition could review the resolution and put forward its recommendations. During his address, the former prime minister lashed at Asad Qaiser and approached his rostrum saying, “You are making the issues controversial. Don’t you have any shame?” The speaker then replied “Hold your tongue and be in your limits. You always behave like this.” As the situation intensified, the PML-N stalwart threatened: “I will take off my shoe and hit you.” To which, the NA speaker asked the PML-N leader to go back to his seat and continue his address.