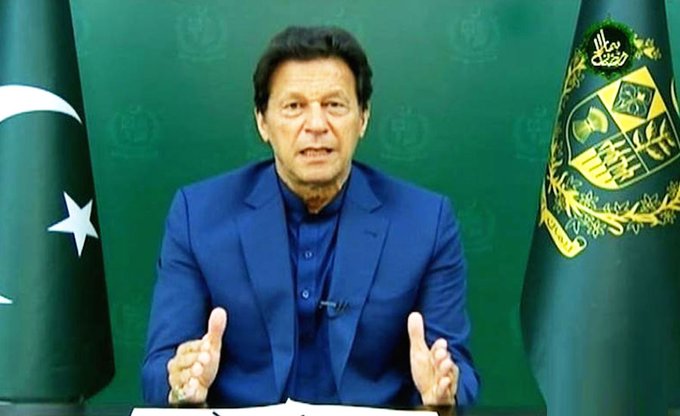 ISLAMABAD: Prime Minister Imran Khan said that he will personally lead the campaign against such blasphemous acts and will gather heads of all Muslim states for the cause. PM Imran Khan said that the federal government and Tehreek-i-Labbaik Pakistan (TLP) want to end blasphemous acts against Prophet Peace Be Upon Him. He said that the government wants to end blasphemous acts across the globe, however, the strategy was different from TLP that demands the expulsion of the French ambassador. The premier said that TLP had earlier held demonstrations and took to the streets as the blasphemous acts were repeatedly made in different countries. He was of the view that the blasphemous acts will not be stopped through cutting diplomatic ties with France or the expulsion of its ambassador, but to adopt a joint strategy by Muslim states. PM Imran Khan was addressing the nation to take them into confidence over the decisions taken on the prevailing law and order situation in the country. PM Khan continued that another country will start continuing the malice act in the name of freedom of expression if Pakistan adopted such decisions against France. Such protests were not being organised in 50 other Muslim countries, however, the situation will definitely affect Pakistan. The premier said that our economy is now reviving after a long time; employment, foreign reserves and exports are also increasing; as well as the cost of imported items are decreasing in the country besides the recovery of rupee valuation against US dollar. He said that the expulsion of French envoy will be tantamount to cutting ties with the European Union (EU). Pakistan’s export volume up to 50 per cent is dependent on the European states, he added. Before the live televised address, the prime minister chaired a meeting of government spokespersons to share guidelines on the prevailing situation, besides, this the premier also held a meeting to review the law and order situation.